Praying for our Friends, Paralytic style 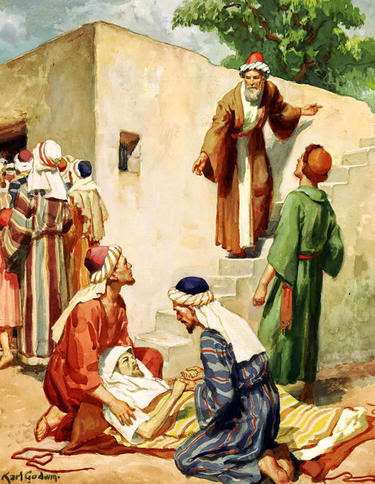 I have been reflecting on the story in the Gospel about Jesus Healing the Paralytic.  This is a good one, and is written in three of the four Gospels.  My Favorite version is in Mark 2:12

Jesus Forgives and Heals a Paralyzed Man
2 A few days later, when Jesus again entered Capernaum, the people heard that he had come home. 2 They gathered in such large numbers that there was no room left, not even outside the door, and he preached the word to them. 3 Some men came, bringing to him a paralyzed man, carried by four of them. 4 Since they could not get him to Jesus because of the crowd, they made an opening in the roof above Jesus by digging through it and then lowered the mat the man was lying on. 5 When Jesus saw their faith, he said to the paralyzed man, “Son, your sins are forgiven.”
6 Now some teachers of the law were sitting there, thinking to themselves, 7 “Why does this fellow talk like that? He’s blaspheming! Who can forgive sins but God alone?”
8 Immediately Jesus knew in his spirit that this was what they were thinking in their hearts, and he said to them, “Why are you thinking these things?9 Which is easier: to say to this paralyzed man, ‘Your sins are forgiven,’ or to say, ‘Get up, take your mat and walk’?10 But I want you to know that the Son of Man has authority on earth to forgive sins.” So he said to the man,11 “I tell you, get up, take your mat and go home.”12 He got up, took his mat and walked out in full view of them all. This amazed everyone and they praised God, saying, “We have never seen anything like this!”
A few things I would like to point out.  First; this is not a parable.  This actually happened.  Second, it was the faith of the FRIENDS that Jesus saw.  (Verse 5)  Thirdly, Jesus heals the man from his SIN first.  This is actually the bigger deal.  Then just to prove that he can, he also heals his body too.   Hello????  Is this not such a RICH lesson for all of us?!?!?

There are so many great messages in this story.  And I have heard it preached many times in incredible ways.  But lately, I have been thinking about one aspect of this story.

Did the Paralytic WANT to be healed???

I mean, think about that for a second.  He was paralyzed.  He couldn't walk, or really even shake or nod his head.  I am guessing he couldn't talk either.  SO who knows really.  Clearly it isn't important or else that detail would have been included.  But one clear point that IS included is that Jesus saw the faith of the MEN lowering this paralyzed man down through the roof.

SO I have been putting myself in this scripture over and over again these past few weeks.  I imagine carrying on a mat my most beloved friends and family, who may be paralyzed spiritually and emotionally.  I imagine approaching the house where I have heard Jesus is visiting, and seeing the crowds. My arms are tired, from carrying this friend on this very heavy mat, and a feeling of desperation comes over me, as I think there MUST be another way.

As I get to the house and realize that there is NO way we can carry him in through the crowds; i want to give up.  I want to just leave my friend, and say, "Well I did the best I could."  I want to say, "I did my part, now it is up to my friend to get themselves to Jesus."    Except that he is PARALYZED.  How in the HECK is he supposed to get into that house, if he isn't carried by someone?!?!    So we have to continue to pray and listen for inspiration, and figure out another way.

I can only imagine the homeowner, when the men start to break through the roof.  As we lower our friend, down, down to Jesus, He looks up to me and sees my face.  Why?  Why did I want to bring my friend to Jesus?  Why am I so desperate to have my friend healed?  Then Jesus sees my heart, and I can only hope he sees a sincere desire for my friend to be healed.  Not for selfish gain, or profit.  Not for any wrong reason, but out of Love.

I like to think also about how in the Gospel story these friends of the paralytic, did NOT give instructions, or advice, or their prognosis of their friend to Jesus.   They didn't try and give his medical history, or shout down what THEY think would really help him.  They just lowered him down, and let Jesus do his thing.

Lastly, once the man got up and walked away, the friends didn't start dancing on the top of the roof, claiming victory for themselves!  They didn't say to themselves, " WE DID THAT!!!  THAT WAS ALL BECAUSE OF OUR HARD WORK!"   No, this is not about them.  And if I think for a moment that Jesus healing anyone I pray for, or I bring to HIM, is about me, then I might as well get on that mat, and get healed myself. 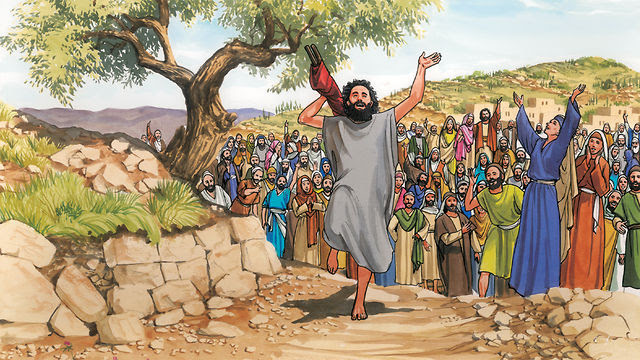 Lord, I thank you for ALL the healing that has taken place in my life, and the lives of those around me.  I thank you in advance for healing all the people I have brought (or dragged) to you on a mat.  I thank you for always accepting my prayers with either a "yes", "not yet", or "I have something better."   You are truly are the BEST thing EVER!!!  I love you, and thank you for loving me.

Posted by Disciple Chic at 5:00 PM