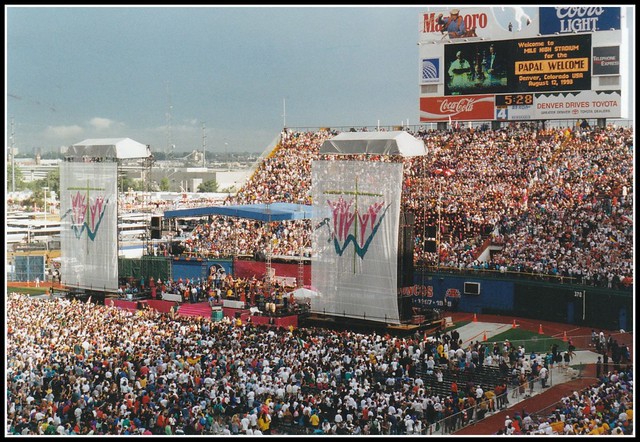 Hearing all the news about World Youth Day with Pope Francis in Poland this week is reminding me of my own experience at WYD in Denver with JP2 back in good old 1993.


WOW!  What an experience this was! It almost didn't happen for me, and I have my saintly mother to thank for pushing my somewhat defiant teenage bootie into the whole experience.  It's a pretty funny story how I ended up going, and worth telling to anyone who cares.

You see, the Youth Minister at my parish was planning on taking only a few students with her, and my essay was apparently not deep enough to win me a coveted spot on the trip.  I really didn't know what it was for, so I wasn't really trying that hard.  But my MOTHER, who knew how special this trip was going to be, pushed and bartered, for me to be included.  She had to agree to come along and bring a friend, for the four day event, which included a 20 mile hike, and sleeping over night in an open field with millions of strangers (something my mother had never done before but apparently was willing to commit to for my sake.)  I know, I had an amazing Mother.

SO there I was smack dab in the middle of Denver, Colorado with cute teenage boys all around me, praising Jesus, praying the rosary, and singing out loud all over town.  To be fair there were millions of teenage girls doing the same thing, but I was a 17 year old female; I only really noticed the boys.

I will never forget the time I spent with all these people, the friendships we made were long lasting, and the feeling of pride in my Catholic Faith was astounding.  The Holy Spirit was present all around, and even the residents of Denver who were not even Catholic talked about the feeling of peace and joy that surrounded the city during that time.

The culmination of the entire event was waking up in the field at Cherry Creek park to John Paul the 2nd's voice, "Good Morning Pilgrims!"  UH MAY ZING!!!    And the song, which became the theme song for the event was, Dana's "We are One Body."  Whenever we sing that song at church I still get goosebumps.

This was the time in my life, where I remember thinking, "Yes.  I am CATHOLIC.  And I love it, and no matter what issues the Catholic church faces, we have the TRUTH, and we are fired up, and it's awesome.

Something about that experience just really confirmed everything I was ever taught about the church.  It was real and powerful and holy and relevant and just made sense.

I went again to WYD in Toronto in 2002, and this time as an Adult taking High School youth.  It was the one of the last times I saw Pope John Paul the 2nd, and yet his message made just as much of an impact as it had when I was a teenager.  He really was the Pope for the Youth.

Posted by Disciple Chic at 8:36 AM No comments: