Did Catholics add books to the Old Testament??? 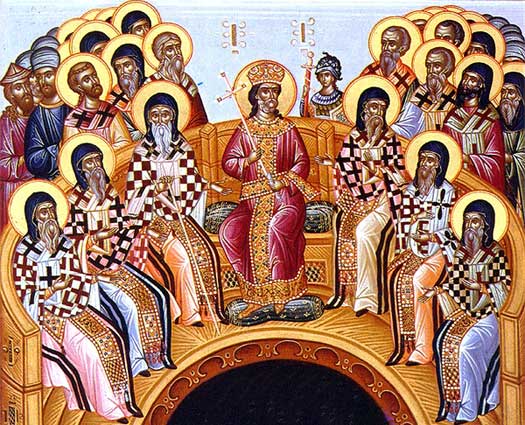 This debate is a regular one in our house.  I know most people are arguing over bathroom space, or who took the last pair of clean socks, but in our house we occasionally debate Church History.  This is normal; Right???  It's not like we are going to need extra counseling or anything. Right???

I would first like to praise my Husband for his Southern Baptist influence on my family.  My kids have been memorizing scripture passages since they were three.  He reads them bible stories nearly every night, and they have all memorized the books of the bible.  Even my three year old can sing the song and recite nearly every book of the old and new testament.

Except for those darn "Extra" books the Catholics have in the old testament.  Those are NOT in the song that we have at home that lists the books.  Go figure.

Many of you probably know about these Old Testament books, also known as the Deuterocanical, or Apocrypha, but maybe you don't know why the Catholics actually have MORE books than our Protestant and Evangelical brothers and sisters.  (You would think if anyone was going to add to the Bible it would be those bible loving Baptists, right?!?) And maybe you don't know that according to Catholics they were not ADDED at the time of the reformation.

The short version in my own words is this:  At the time of Jesus there was not a DEFINED old testament.  Some groups of Jews used only the Torah, while others read the writings from the Prophets as well.  Some of these inspired writings, were originally written in Greek, but most originally written in Hebrew.   There were versions then that were totally translated into Greek, and then others that were not.  Different groups used different versions of the old testament for a few hundred years.

It was around the 4th century that the books of the bible were clearly identified and listed, and it was repeated at at least 4 councils.  The Synod of Rome (382), the Council of Hippo (393), the Council of Carthage (397), a letter from Pope Innocent I to Exsuperius, Bishop of Toulouse (405), and the Second Council of Carthage (419). In every instance, the old testament canon was identical to what Catholic Bibles contain today. In other words, from the end of the fourth century on, in practice Christians accepted the Catholic Church's decision in this matter.   (from Catholic Answers web site, read full article here.)

SOOOOO, did Catholics add these extra books to the Old Testament during the time of the reformation???

Or did someone else take them away?  (Ahem. Martin Luther?)

There is so much information out there on this, and the internet is FULL OF INFORMATION regarding this specific subject.  Unfortunately not everyone agrees on what is actually the TRUTH.

Some Great Catholic Resources on this.
Catholics United for the Faith
Catholic Education Resource Center

AND just for the sake of information I am including these OTHER perspectives: (Which for the record I do not agree with.)
Some Bible website with an explanation
Something called Truth Magazine

UGH.  SO what is the actual truth?

This is when I would LOVE LOVE LOVE to build a time machine, go back in time and interview Jesus and ALL the early Christians. I want to find out exactly what was intended, and meant by every single word that was written down.  I want to know who is right and who is wrong and which denomination is the most accurate.  (ie, the BEST.)

In all fairness this is a good argument in favor of the Roman Catholic teaching on Church Authority.  I mean somebody down here should have been left in charge so we don't all argue all the time.  (*cough: Matthew 16:17-19)

But the real reality is that I need to learn to get past all this and just practice the teachings of Jesus and LOVE everyone.  It doesn't matter whether the book is included or not, it doesn't matter whether you go to a mega church with a coffee shop in the lobby, or an orthodox church which hasn't changed in 2 millenia. JUST LOVE EVERYONE, and ESPECIALLY LOVE GOD.

Alright God, I will work on that.  But in the mean time if you could help us sort the truth out, I would be real grateful!

Posted by Disciple Chic at 9:41 AM