Doors Slamming in my Face... 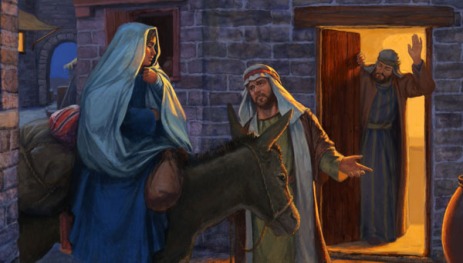 I am working on a project and I feel like doors keep slamming in my face.

It feels sort of like doors slamming in my face.  Then last night, after a particular loud SLAM, I went to bed, and God totally provided with me a revelation.

I wonder how Joseph felt when he was entering Bethlehem and realized there was no place for him to stay?

I mean, if I had been Joseph, I would have probably been totally excited for the amazing 5 star Marriott Hotel with super awesome Breakfast Buffet (complete with omelet station!) that God was going to provide for Mary and I when we arrived in Bethlehem.    I mean after all Mary WAS going to be giving birth to the SON OF GOD.  Why wouldn't God be providing an AMAZING set up for Himself?  I mean he is GOD.  Right?

I think I would have been dreaming of my omlet the entire walk from Galilee to Bethlehem.  Tomatoes, bacon, spinach, onions, and lots of cheese.  Totally.  Maybe some feta if they have that too.  For sure a waffle.  Loaded with whip cream and chocolate chips.  I mean it's free right?

Or whatever the equivalent to this is around the birth of Christ.

If I were Joseph, and I had showed up to the first place and they had said, "NO ROOM" I think I would have been slightly annoyed, but I would have told myself, it is probably just because GOD has something better in mind.

But what God had planned wasn't better, was it?  It was way worse.

I think if I were Joseph, when I finally went to the LAST PLACE in BETHLEHEM and they told me again, sorry dude, there is not any room here either, I WOULD HAVE FLIPPED OUT.

I mean seriously God?  (I would have been thinking.)  I am doing all of this for you and you can't even provide a decent place for us to sleep????  I would have been probably doubting and WHINING, "Why the HECK isn't God paving a path for me to do His will easily?"   I would have been wondering where the heck GOD wanted MARY to give birth to HIS son.

I probably would have been doubting whether or not it really was God's son.

The next thing I know I would have been trying to make Mary as comfortable as possible while she gives birth to the son of GOD next to animals.    I think I would have felt completely confused, and angry and annoyed at how ridiculously far away this whole scenario was from my idea.  I probably would have felt like I failed my pregnant wife, and that I looked like a disorganized husband.

Of course now we know the entire plan.  Now we celebrate Christmas with tiny manger scenes.  No one thinks about how God could have come up with a birth plan that truly GLORIFIED Him the way He is due.  (Yes. I do mean omelet station.)

Yet, when I do God's work now, I so easily forget that sometimes God's plan doesn't look so pretty. Sometimes it is messy, and sometimes it even involves manure.  But it is STILL HIS PLAN.

So as these doors are slamming in my face, I have to take a minute to realize that maybe this project I am working on, won't be 5 star.  Maybe it will be messy and challenging and maybe it will be completely different than I am expecting.  But just because it may not be GLORIOUS, doesn't mean it wasn't his plan all along.

Posted by Disciple Chic at 4:48 PM